‪Thank you for your videos and insight to these topics. I have a question, and is in regard a claim that there’s alien life form below earth. This is a claim that US colonel SC Adamantly makes in a video ( see link below ) Please advise if you could further elaborate to this, if this is indeed true. Thank you again, best regards. ‬
‪Jose A. ‬
‪http://www.theedgeam.com/‬

I do feel that there are beings that live below the Earth deep in caverns. I have done past life regressions with people who have interacted with beings there. Most of the beings that I have seen there via my meditations (I like to zoom around and explore these kinds of places in my quiet moments) have been insect beings. These beings may seem alien and weird but they are ancient and they have been here for much longer than humans and longer than the reptilian species as well. They have extremely tough and durable biological systems that allow them to live in what we would consider harsh conditions at times.

I know that there are crystalline cities as well overlapping our earth in a different dimension. Sometimes it is difficult to tell whether or not these beings or places are actually in the third dimension and it is hotly debated to this day! 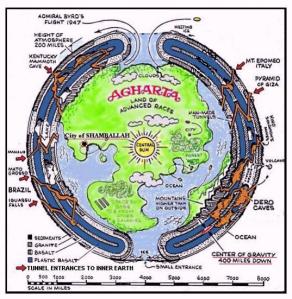 As for the colonel I see him as being truthful about having an experience like this. People can shift into other densities via vortexes on the planet, we see that with the bermuda triangle, the great lakes triangle, shambala and the poles. It is entirely possible for two individuals to visit the same place and experience different worlds when there is a density shift. As multi dimensional beings with multi dimensional capabilities our third dimensional existence is actually a mash up of many densities. We may exist physically in the third dimension, for the most part, but are entirely capable of going beyond- and when the conditions are right, we break those barriers.

Beyond the insect beings I also understand other beings have taken up residence including our own military. Speaking of military I have always been interested in “New Berlin” the supposed Nazi settlement in Agartha (the inner Earth). Perhaps that will be my next astral adventure (woot)!

One thought on “The Inner Earth”

Thank you for your support.